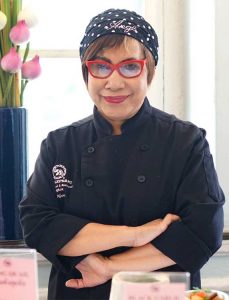 For over 40 years Chef Nooror Somany-Steppe, co-founder and director of the Blue Elephant Group, is one of the most famous ambassadors of Thai cuisine around the world.

Born amongst the bustling floating markets of Chachoengsao province in Thailand, Master Chef Nooror Somany Steppe had always a deep link with the culinary world but her passion for Thai cooking was inspired by her mother, an established cook and well known for her delicious homemade curries.

Presently, Chef Nooror continues to create new Thai dishes using the Royal Project products and ingredients, and travels worldwide with the pride of showcasing Thailand in her capacity as not only one of the country’s foremost Thai women chefs but also an ambassador who plays a significant role in promoting Thai cuisine and culture globally.

Chef Nooror has established a name not only for her original and historical knowledge of Thai cuisine, but also for her ready-mixed recipes of Thai sauces, curry pastes and powders, which are presently produced and exported to over 30 countries. Her culinary skills also extend to Indian and French cuisine, and this is frequently reflected in some of her innovative dishes and presentation.

Was yours a conscious decision to become a chef or did you find you fell into it?

I was the youngest of seven children; my father owned slaughter houses and my mother was an established cook and well known for her delicious homemade curries. My mother taught me the culinary art along with some secret recipes from an early age.

How did the Blue Elephant Saga start?

A lot of people think the Blue Elephant story is only about me, but in fact it’s more about my husband Karl. I even say that Blue Elephant happened because of him. Karl loved Thailand and Thai culture. Karl was my teacher. He trained me and taught me a lot during my stay in Europe.

When I met Karl, he was an art dealer and he supported me and my brother to study in Belgium. My older brother was studying hotel management in Brussels while at the same time working for an antique dealer. I followed him to Belgium and ended up working for the same art dealer, Karl Steppe. The rest is history.

Karl also convinced me to enroll at a culinary institution in Brussels, Madame Jacob’s cooking school, where I learned about duck confit, foie gras and how to make pastries. To this day signature dishes at Blue Elephant is a blend of European cooking methods and traditional Thai recipes.

From L’Elephant Bleu to Blue Elephant

The very first Blue Elephant Restaurant, in fact L’Elephant Bleu, opened in Belgium in 1980 where I had settled down with my husband, Karl Steppe.

After Brussels we opened London, Karl’s mother had an antique shop there, followed by Copenhagen and Paris. Thai food was practically unknown in Europe in the 80’s and Blue Elephant contributed to popularize Thai food on the continent and worldwide.

What’s the difference between running a restaurant in Europe and running one in Bangkok?

In Europe, one person had to do everything and be much more versatile. In Asia in general you have one person dedicated for each task in the kitchen.

During my early years in Europe I had to work very hard; from going to the market early morning to cooking in the kitchen and sometimes we had no staff and I had to run out to do a service as well.

In Europe you have to remember your repeat guests and food preferences. Patrons like to show that you know them and that you will prepare their favourite dish like, last time.

What are some emerging food trends that you’re noticing?

It’s not so much about food but more about platting has become an essential element in restaurants today. We have to cook century old recipes but the food has to look nice on the plate. And of course, today guests expect healthy food prepared with organic ingredients. In Phuket we promote the peranakan cuisine, which originated on the island but is nowadays very popular in Singapore.

What do you think the most important qualities are in a young chef?

At our Blue Elephant Cooking School we have highly qualified trainers from different universities with years of experience. If your ambition is to be a chef you have to enroll with a very open mind and with the attitude that you have to come to learn. An inspiring chef should have the passion for food and cooking but also to be humble and respect other people.

What’s the one cooking tool that a Chef should not be without?

Personally, I considered the mortar and pestle the most important tool in the Thai kitchen. A cook should never overlook the importance of a pestle and mortar. You use it to pound paste, mash fresh herbs or chillies and aromatics forming the base of every Thai dish. Unlike the food processor, the mortar is the ideal tool for smashing ingredients so that their essential oils are released.

What do you think about chefs like Gordon Ramsay, who have taken haute cuisine to the masses via reality TV?

I like his programs as they are very entertaining and, as a chef he has a lot of technic. I have to learn from him and other Michelin-star chefs who come to Blue Elephant.

What’s your next plan or dreaming?

When I go home I make bread, I wanted to be a bakery chef; making bread and cakes make me happy. Being a bakery chef is fun, but it’s only a dream.

A Little Taste of Spain at Savelberg Thailand